A Glimpse at the History of Machias

The Town of Machias

Machias is covered by a portion of the "dividing ridge" (highland) which forms a
watershed of the Allegheny River and Cattaraugus Creek.  The Western New York &
Pennsylvania railroad and the Buffalo, Rochester & Pittsburg railroad both served
the Town and both had a station at Machias Junction.

The outlet of Lime Lake is the Town's largest stream, followed by Ischua Creek.
Lime Lake, in the northeast part of the Town, derives its waters entirely from
springs beneath its surface.  This Lake is a charming summer resort
which offered, in earlier years, employment in winter for ice harvesting.

The first settler in Machias arrived in 1813 with the first saw mill and grist
mill built in 1820 and 1823 respectively.  The first store opened in 1822, with
the first school house being built in 1827.  The inhabitants which engaged mainly
in farming, with maple sugar manufacturing, and cheese making (1st factory 1866).

Just outside Machias village was the County Alms House, a house for the care of
the "indigent and insane" of Cattaraugus County.  Today, here stands the Machias
Nursing Home.

The hamlet of Lime Lake was the location of the first store, first mill, and the
first and only wool - carding and cloth-dressing factory in the Town of Machias.
In the 1890's, this hamlet consisted of a tavern (1830 ), a hotel, a grist mill
(1823), a saw mill ( Lime Lake Mills - 1835), a school house.  A station (1893)
of the Western New York & Pennsylvania railroad was established here known as
Odosagi which is of Indian origin meaning "clear spring water".

Machias Junction, the junction of the Western New York & Pennsylvania and the
Buffalo, Rochester & Pittsburg railroads, had established in the 1890's, a post
office, a hotel, two stores, and a school house.

Summit Station, situated on the Buffalo, Rochester & Pittsburg railroad in the
southwestern part of Machias, contained a post office (1888), and a saw mill
(1881 - Jewell & VanDewater).

The Cattaraugus County Poor-House in Machias, New York is the last surviving building from a complex of four that from the mid-1800's was a residence, asylum and working farm to serve the County's poor and insane. In 1860, County Supervisors commissioned the Machias Stone House to be built to serve as the centerpiece on a self sufficient farm that cared for the poor and mentally insane of the County. The Stone House, as it is referred to today, is situated on New York State Route 16, in the village of Machias, NY. It is located on property owned by the County, where a nursing facility has been located since the first half of the 19th century.

Mr. John Napier, resident of the town of Machias, NY and a well known local stone cutter was hired in 1868 to build the County's new building. Prior to this project Mr. Napier had gained skill working on such national projects as the dam across the Merrimac River in Lawrence, Massachusetts, the aqueduct across the Genesee River at Portageville, the bridge spanning the Mississippi River at St. Paul, Minnesota, and the Old State Capital building at Springfield, Ill.

These projects brought fame and fortune to the Machias resident, who in 1868 turned his skill to building a home for the poor in Machias, NY. The stone for the building was cut from the family's quarry and carved to build a structure that originally stood four floors high with a pitched roof holding a cupola. The top floor, that was comprised of the pitched roof and cupola was removed in the 1950's because of roof problems. It was at this time that the building was discontinued in its use as a nursing facility and began to be used for a clinic and administration offices.

Mr. Napier during his career built other structures in the County namely, Ten Broeck Academy in Franklinville, and the Samuel Butler home in Machias. Both of these structures have now been demolished, leaving only the Machias Stone House to stand as a monument to the work of one man who for more than forty years was actively engaged in the design and superintending the construction of public works, many of which will remain a testament to his mechanical skill. The Harlem High Bridge, Harlem, NY and the Springfield Ill. Capitol building are such examples.

Erected in 1868, the venerable Stone House, located upon the campus of The Pines Healthcare & Rehabilitation Center, 9822 Route 16, Machias, NY, is the sole surviving structure of the 19th Century Cattaraugus County Alms-House and Insane Asylum, which became the Cattaraugus County Home/Farm and Infirmary.

The institution was established in 1833 when the County Legislature resolved to acquire property to care for the indigent, aged, orphaned, infirm and insane. In 1834, the County purchased 200 acres, including the existing site, for $2300.00, and started construction of several wood-framed buildings for the patients. The Napier family of stonemasons from Machias erected the existing Gothic style Stone House as the Alms-House (poor house), for the princely sum $18,000.00. The Napiers were accomplished craftsmen, and also constructed the original Ten Broeck Academy at Franklinville, NY (DEMOLISHED), the Illinois State Capitol at Springfield, Ill., and all the trestles and piling for the NY & Philadelphia Railroad between Machias and Emporium, PA. The 1869 Beers & Co. Atlas of Cattaraugus County depicts a stoUe quarry near the Napier homestead, in southeastern Machias, near the Catt. Co. Highway building on Rt. 16. Due to its proximity to the Napier property and the building's location, it's likely the quarry provided the natural material for the Stone House, which remains as a monument to the industriousness and deft skill of the Napier family.

By 1885, there were 60 residents in the Stone House, including "paupers, idiots, and epileptics". Throughout the 19'' and 20th Centuries, the Alms-House and farm was a shining example rural self-reliance. The bustling barn complex across the street provided dairy, meat and poultry products for the institution, and was supplemented by bountiful gardens and orchards. The residents and County employees of the institution provided the farm labor. The wood-framed residences and outbuildings were demolished, and the acreage and barn complex across the street were sold in 1957, leaving the Stone House as the sole vestige of a very successful 19u' Century socioeconomic communal enterprise.

Throughout its 135-year history, the Stone House has been on the chopping block before. During construction of the existing nursing home in 1961 and extensive renovations in 1979, the Stone House was also in jeopardy. Thanks to the foresight of the former County Legislatures, however, the Stone House was recognized for its historical value, and spared from demolition. To its credit, the current Legislature has maintained the Stone House in fine condition and it is not a dilapidated, crumbling structure. Today, the fully functional, handicapped-accessible building is utilized by the Catt. County Dept. of Nursing Homes & the Dept. of Health, and open to the public. If you have not seen the building recently, please visit to gain a better appreciation for its remarkable condition and viability.

Granted, the Stone House is not a National treasure like Mount Vernon, and its original gable roof and fourth floor attic space have been removed. However, these alterations do not diminish its intrinsic value as a precious thread woven deeply into the rich historical fabric of Cattaraugus County. As the oldest continually operated County building, and indeed the only County owned landmark left, the Stone House is a tenacious survivor, worthy of preservation and continued use.

**For more information on the town of Machias and surrounding areas, including local legends and history, please visit http://historicpath.com/municipality/towns/machias

What's Going on at The Pines?

View PDF files of our Calendars 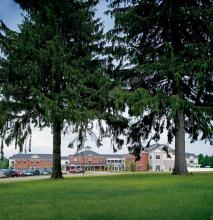 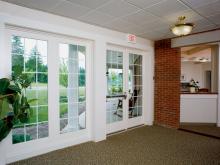 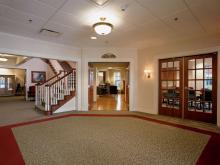